In a place called Barrington, New Hampshire, there was a farm that was beloved by the Boyle family. It had been purchased by my grandfather in the autumn of 1916. The summers of my father’s family were to be spent at Greenhill Farm, but it was kept as an ongoing farm all through the year. When the family went back to their home in Massachusetts, hired men took care of the numerous animals on the farm. Indeed, there were dairy cows, horses, chickens and pigs who needed to be taken care of every day. My Uncle Warren took care of the farm in later years until my grandfather died and the farm was sold. That was in 1941.

In 1951, my father and mother were near Barrington, my siblings asked for our dad to drive in to see the old farm. They did that, and the farm was for sale. The farm had deteriorated over the years and was in a deplorable condition.  On returning home, my father informed all seven of his children that he would purchase the farm if all his children would help him rebuild it. All agreed, and the farm returned to the Boyle family.

Many years after my father sold the farm, it caught fire and was destroyed. As the farm property had been in litigation between two lawyers for some years, I felt inside that the farm was so sad and longed for the happy days it had known that it could no longer exist. That is the poetic part of my soul. But what the farm was in the past has not been forgotten and lives on now in the memory of the remaining sons and daughters and, especially, in the memory and hearts of the grandchildren.

One of the grandsons who is in construction has said many times he would like to build a home exactly like that colonial Greenhill farmhouse.  Another grandson has become a landscaper and tends gardens in many different communities.  A third grandson has purchased a hundred-acre farm in Peterborough, New Hampshire and looks forward to one day holding a family reunion at his new farm. My parent’s granddaughters also hold the days at the farm precious and have been involved in gardening and caring for animals. So, although the farmhouse is gone, it is alive in the memories of all who were connected to it.

The world of nature and God became a living reality at the farm. In the evening, the deer would sometimes appear in the lower meadow. A mist would arise from the fields, and the tamarack trees would look to arise out of a lake rather than a field. The moon would appear in the darkness and give such a wonderful light to the evening. The fireflies would bounce along the meandering brook and rise and fall in the evening breeze. A whippoorwill would sound at the back of the farmhouse and a foolish brother, unable to sleep, would count its calls into the hundreds and still would not find the peace of restful sleep. The bird actually became an annoyance. How I miss that sound I once heard in my bedroom at the farm. I long to hear that sound here in Hopkinton, New Hampshire but so far, I have waited in vain. And the stars, not hidden by city light pollution at the farm, would turn God’s beautiful heavens into millions of sparkling, blinking lights, not unlike the fireflies on earth.  Walk with me  down the road to the fields or up to the road to the hill and God’s wonder will, as said by Gerard Manley Hopkins, “flare out.” 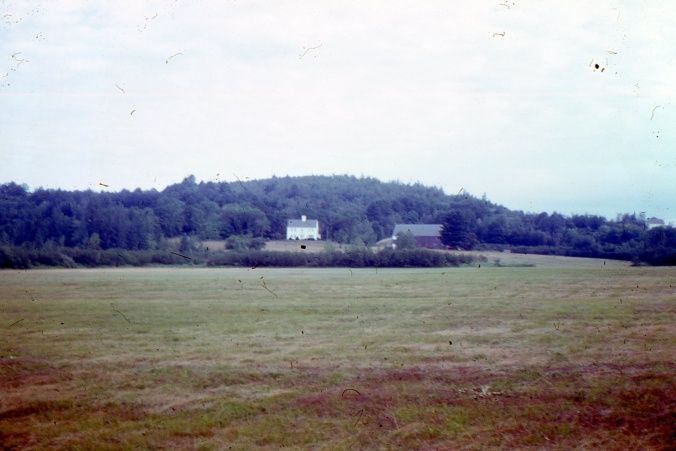 You could not live life at the farm without believing in a creative, loving, wonderful God, and that was just in the evening. In the early morning, the noontime, and at twilight, God was present. But God was inside the farmhouse as well, especially in the kitchen.

The kitchen took up almost all of the original part of the house. It was an ell off of the huge colonial house.  In that kitchen was a wood stove and a rather modern kitchen oven.  It was the one really warm room in that unheated house. In that room, you would smell the frying of bacon and eggs and a johnnie cake in the oven. At noon time, sandwich time, you would find a beef stew was being prepared for supper. A blessing was said at every mealtime for we knew it was the graciousness of God that fed and nourished us.

In the living room and the dining room adjoining each other an open manner, there were fireplaces heaped with burning logs on a fall evening. The family and relatives would be gathered near the fires and lives and stories would be shared. As sparkling embers climbed the back of the brick fireplaces, you could feel the warmth not only of the fire but of the human hearts caring and reaching out to each other. That was where God was also found on that farm, in our relationships and caring and concerns for each other’s lives.  At the Greenhill farmhouse, God was there in a touch of a hand, a pat on the back, encouraging words for tomorrow, a hug or a kiss good night. God was there at Greenhill farm as God is there right now if we but look to find Him no matter where we reside; for yes, He is in the city, too.

I wish for you a week, rather a lifetime, of a closeness to the Father Jesus teaches us about. May our lives be filled with kindness and love for each other as exemplified by our Lord. God bless you and may you feel His loving arms about you this week wherever you are.

“And now may the Lord watch between me and thee while we are absent one from the other. Amen.”