Hope you will find our walk together meaningful and that you will comment if you have any suggestions or topic or people you would like to have join us next time.

The harvest truly is great, but the laborers are few; therefore pray the Lord of the harvest to send out laborers into His harvest. 3Go your way; behold, I end you out as lambs among wolves. 4Carry neither money bag, knapsack, nor sandals; and greet no one along the road. 5But whatever house you enter, first say, ‘Peace to this house.’ 6And if a son of peace is there, your peace will rest on it; if not, it will return to you. 7And remain in the same house, eating and drinking such things as they give, for the laborer is worthy of his wages. Do not go from house to house. 8Whatever city you enter, and they receive you, eat such things as are set before you. 9And heal the sick there, and say to them, ‘The kingdom of God has come near to you.’ 10But whatever city you enter, and they do not receive you, go out into its streets and say, 11‘The very dust of your city which clings to us we wipe off against you. Nevertheless know this, that the kingdom of God has come near you.

Hello, I am so pleased you are going to walk with me today. How have you been? Did you have a good weekend? Did you accomplish any special projects? There were so many things that happened around our home this past weekend.

A few weeks ago, Dale asked me to put up a chair rail in our kitchen and I completed it about a couple of weeks ago. Now that it was complete, she wished to paint the walls beneath the chair rail.  Somehow she completed what she desired to do. Then on Saturday, daughter Brenda and son-in-law Mark came to our home to give Dale her Christmas gift. Her gift from them was the building of three raised gardens. By the end of Saturday afternoon, the gardens had been completed, save a little loam for one of them. On Sunday afternoon, Dale planted the first seeds in her new gardens. She sure has a long way to go to make our gardens beautiful for any flowers that were here are all weed-choked or dead. 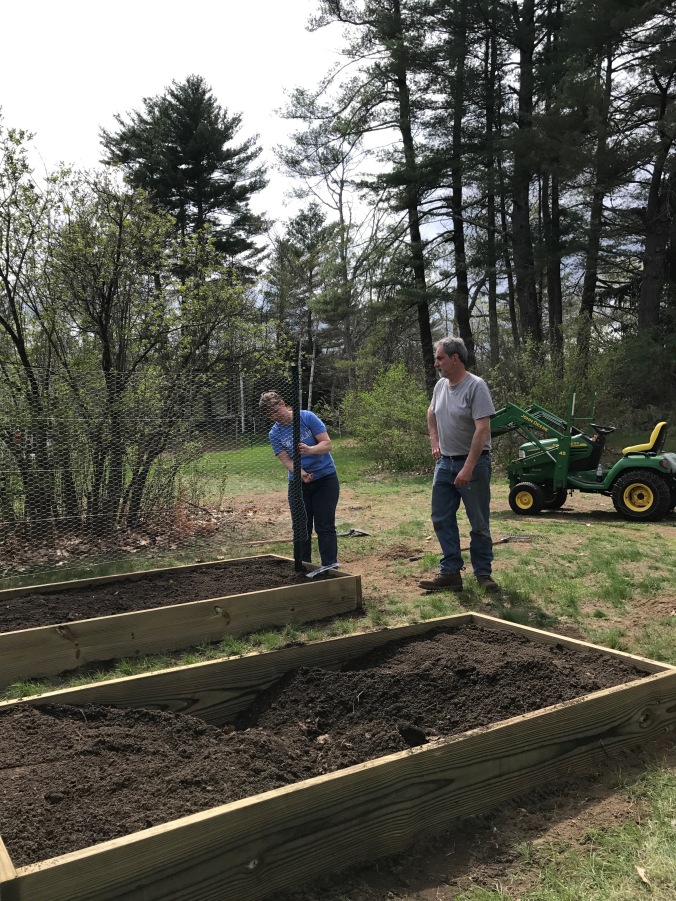 Now as you may well know, gardening is not my thing. I always thought I would like gardening as my father did, but that has never happened. No, I love my woodworking shop, not gardening. I am so grateful to Mark and Brenda for their gift to Dale. However, there is a lot of gardening left for me to help with, as there are still bushes to be pulled out with the tractor and many leaves to rake and branches to pick up. Perhaps, I should look for a Saint Francis.

Born into a very wealthy family, he spent his youth as most youths of his day and of today spend theirs. His life was carefree, and he had few responsibilities. Slowly and with patience, God was calling Francis to be a disciple of Jesus. While working in his father’s clothing shop, he began to feel wrong about poorly treating those who could not afford new clothing. As he was finding his calling from God, there was an instance that some poor people came to his store, and he drove them away. Thinking about what he had just done, he went out of the store and called those he had driven away back into the store. He then outfitted them with new clothing and did not charge them any money. His father was furious at him and so began a long period of disagreement between the father and son over his kind action.

Francis began to repair Saint Damien, a chapel in disrepair. Once more, his father was so upset he called Francis into court. The story was repeated that Francis left the courtroom and returned naked giving his father the clothes he was wearing. Naked he came into the world, and now he would leave his father’s prosperous road with nothing, even clothing, but a strong faith in God’s calling him to service.

One of my favorite stories of Saint Francis was told in a twilight classroom at Boston University School of Theology when I was in Seminary. Dr. Booth spoke of how Saint Francis was riding his horse when a leper approached him. In a panic, Francis turned his horse quickly around and fled from the dreaded leper. He then thought about Jesus and how Jesus responded to lepers, and he again turned his horse around and rode back to the leper, dismounted his horse, knelt, and kissed the leper’s hand.

Now let me tell you why I said at the beginning of our walk that I would like to have a Saint Francis come into my life to help with gardening. You see, Saint Francis and the brothers who followed his teachings went out into the world to help their brothers and sisters. They carried no money, and by their labor for others, they were fed. They would see a peasant working in the field, and the next thing the farmer or peasant would know St. Francis or one of his followers were hoeing weeds or helping to plant or harvest a crop right beside them. Of course when the days work was accomplished, the farmer would feed those who had labored with them. Imagine how happy those who were working so hard were to have help from Francis and his followers. And what was the reward for those who helped the peasants? It was the knowledge that they had acted in a manner befitting a believer in the teachings of Jesus Christ.

So often, our Lord speaks of the world of farmers or of nature. He talks of the lilies of the field, of the birds of the air, of the wheat fields, and of the need for planters and harvesters. Jesus talks of seed falling to the earth in rocky or in good soil and compares it to the lasting nature of our faith. Our Savior talks of the good laborer and the bad laborer, of the kind and good master, and of an evil master. He speaks to us and tells us to love our neighbor as we love ourselves. We are here on earth to lift the burdens of others as well as to believe that our neighbors will help us as well. We are brothers and sisters in this life, and we are to treat each other as a close and good family.

Saint Francis would pray all through the night at times; others would hear him doing so. He was the one who brought the Christmas nativity to us, who loved animals and the world of nature. And what did he do when he was dying?

There in the almost darkness of the classroom in the fall of the year, the professor with the stark white hair and a learned voice would speak. When he – Saint Francis – was dying, he asked for the brothers to carry him out of his cell and place him naked upon the earth. From dust he came and to dust he would return.  Then the voice of the teacher would continue, “ that the birds of the air came down to Saint Francis to say not goodbye, but to lift his spirit heavenward to the eternal Savior he loved.” And in the darkness, I realized in my heart that Francis was greeted in Heaven by our Lord Jesus Christ. May we so love others around us and help them in their times of distress and labor so that Jesus may reach out and greet us someday as He certainly reached out to Francis.

Dear God, we thank you for the example of Saint Francis of Assisi. May his life inspire us to help others on their journey through their lives.  May we be good neighbors and may our neighbors be a blessing to us. Through sharing each other’s blessings and burdens and by speaking often with our Lord, may we find life ever more beautiful because we are brothers and sisters together. This, our prayer, we ask in Jesus’ name. Amen

Until the next time we walk together, “May the Lord watch between me and thee while we are absent one from the other.  Amen.”

One thought on “Walk With Ken Boyle XXV”