They have promised that tomorrow a cool front will move into New England and this pastor who loves the autumn best of all will be filled with new energy and happy to welcome the relief from humid, summer weather.

9Then, as soon as they had come to land, they saw a fire of coals there, and fish laid on it, and bread.

0Jesus said to them, “Bring some of the fish which you have just caught.”

11Simon Peter went up and dragged the net to land, full of large fish, one hundred and fifty-three; and although there were so many, the net was not broken. 12Jesus said to them, “Come and eat breakfast.” Yet none of the disciples dared ask Him, “Who areYou?”—knowing that it was the Lord. 13Jesus then came and took the bread and gave it to them, and likewise the fish.

14This is now the third time Jesus showed Himself to His disciples after He was raised from the dead.

Molly and I were out on the patio for a while this morning, but it was very warm and humid. The day is clear and sunny and hot already. We retreated to my study where there is some air conditioning, and it is far more comfortable than outdoors.

Come sit with me a minute. Our daughter Annie and granddaughter Maddie came to visit, and they may have wished they had remained at home. There was a huge pile of wood in our backyard that needed to be stacked and Annie had said that they would help. This was the weekend of the Hopkinton State Fair so it was a good time for them to be here; that is, after the wood had been stacked. There was only one problem – there was too much wood for the rack I had put together. 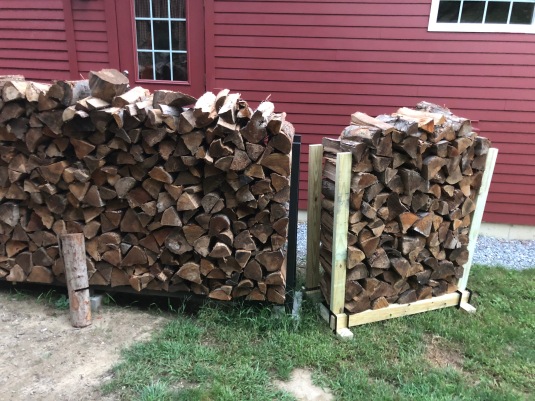 When we had supper together, we planned that I would put together another wood rack and that they would return in the morning to pick up the rest of the firewood. Indeed they did. They filled another ten by four foot tall rack, helped put a birdhouse up, had lunch with us, and then headed back to where they were staying. Dale and I were so thankful they had helped us. Molly was going to miss Maddie. Molly loves children. 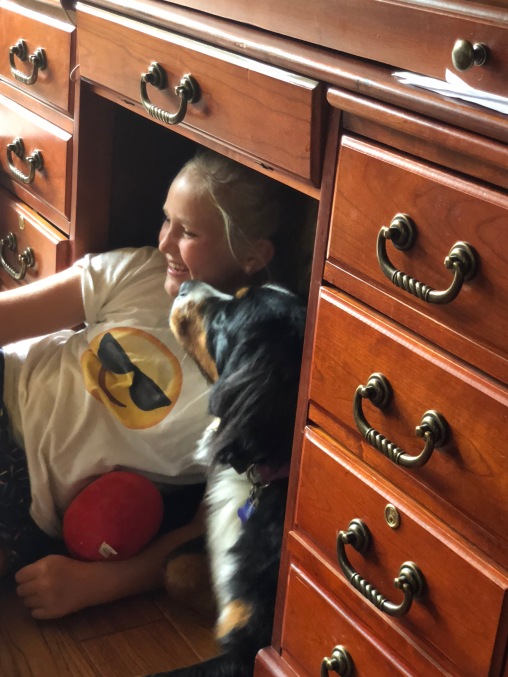 As a young boy, I knew little about stacking wood or harvesting it either. When we lived in Melrose, we had a fireplace in the living room but it was seldom used; one of those times would be after Christmas when the decorative fir branches had to be disposed. My dad would put them in the fireplace and set them on fire. I know I have shared this story before….one year, he forgot to open the flue first. The living room had just been repainted, and a new carpet had been installed. As the smoke poured into the room, my father yelled at us to get a towel or cloth and start fanning the air so that the soot would not settle – he was frantically opening windows. The room survived the smoke attack, but I am not sure my mother survived the horror of seeing her beautiful, redecorated room filled with smoke. The fireplace in Melrose was not a necessity; the fireplaces at the farm were.

When my dad purchased the farm in Barrington, New Hampshire, there was not any central heat. If we were going to spend any time there in the autumn or winter, we had to keep fires burning in the two fireplaces in the living room and dining room and in the stove in the kitchen. I learned how tricky it could be lighting a successful fire in that kitchen stove. To establish a draft, you had to put a piece of newspaper up the flue, light it first, and then the draft would be established. That stove in the kitchen produced the most warmth in that farmhouse. As a matter of fact in the morning when you woke up in an ice-cold bedroom, you prayed that dad had made a fire in the kitchen stove, and you headed there as fast as you could.

In the living room and dining room, you sat as close to the fire as you could. The old statement was true – sitting by the fireplace your front baked and your back froze. The only times that did not seem to be true was when Uncle Alfred was at the farm, and he built the fires. Uncle Alfred grew up in Vermont and knew how to build and to keep a wood fire burning. He would pile up the wood almost to the flue, light it on fire, and then he would keep feeding wood to the fire so that the rooms became toasty.

There were many cool or cold nights when I lay down on the floor by the fireplace and watched the sparks shoot up the chimney and the embers smolder and flicker. There were times after a hard days work at the farm I fell asleep there.  Now today if I was to lie down on the floor by the fire, I might never be able to get up. Ah youth is such a wonderful thing, but age brings a wisdom youth does not appreciate. Hmmm, I wonder if that is true?

In the fall, we would go down into the woods and cut down trees for firewood. We would cut the wood in four-foot lengths and bring it to the area of the barn. We had a cordwood saw on the back of the tractor, and two or three of us would work together one putting the four foot log on the table before the saw, another would push the table forward cutting off the log, and the other would fling the log cut far away from the saw. That was the most dangerous job for you were very near to the saw blade holding a sixteen-inch log. Whenever I had that job, I remembered the poem by Robert Frost, Out, Out. That poem tells of a young boy losing his life sawing wood. One had to be most careful and still needs to be if one is off cutting wood for the winter.

Our home will be warm this winter sitting by the stove in our living room. And by that stove, we will remember the stacking of the wood, the friendship and the help of our family. By that stove, I will remember the work at the farm with my brothers and my dad as we cut wood for the winter. Once more, I will see my aunts and uncles at the farm and my brothers and sisters. I’ll remember sitting beside Uncle Warren or Uncle John and hearing stories of their boyhood on the farm. Memories will flood back to me of family, home, contentment and happiness.

Jesus Christ unquestionably would also remember sitting by a fire with His friends and family. Nights are cold on the desert, and a fire would be welcome. By a fire, stories would be remembered and told.  Indeed, our Bible was written with those old oral stories remembered, many of them heard by a warm fire.

Some of the stories would be difficult. Jesus would remember the epileptic child who having a seizure fell into the flames of a fire. But certainly, he would also remember happy stories and happy times with the disciples he loved.

After His resurrection, Jesus met the disciples fishing. They had caught nothing all night, but He told then to go out again and cast their nets. The disciples did as they were told, and their boat was filled with fishes. When they went back to land, there was a fire burning and Jesus said, “ Come and eat breakfast.” By that fire, they would ask themselves if this was the Lord? When he gave them bread and fish, they remembered the Last Supper, and they knew it was indeed their Risen Lord.

Prayer: Dear Lord as we come to a new season and colder weather here in New England, may we look forward to times by a fireplace and to a warm home filled with love and memories. May our faith in You, our Risen Lord, keep our hearts warm and our spirits lifted high along our earthly journey; through Jesus Christ our Lord. Amen

“And now may the Lord watch between me and thee while we are absent one from the other. Amen.”

3 thoughts on “The Fire – Walk With Ken Boyle LXXVII”